Most stitchers need an ironing board at some point or other - albeit for 'pressing' far more than 'ironing'.  The finished result of many stitch projects is massively improved by pressing at the right time and many modern products are iron dependant.  A selection of ironing boards and pads can makes pressing hugely easier and it's so simple to make them visibly appealing.  I was in need of an additional board this week for my new stitching space at the Red Brick Building in Glastonbury.  Off came the very uninspiring cover from my cheapo purchase and in came some striking aboriginal design cotton.  I placed the uncovered table face down on the reverse of my new fabric, drew a chalk line 2" wide of the table edge and cut out the resulting shape. 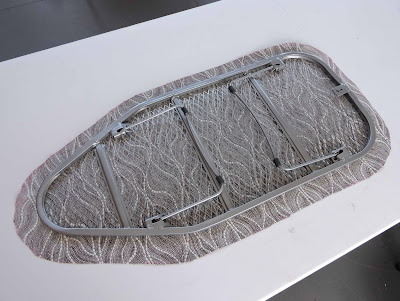 Next I made up sufficient bias tape go around the edge of my cut piece, plus a tad more for wriggle room.  I cut 2" bias strips to encase 1/4" elastic that I planned would hold the cover in place.  On this occasion I didn't use my much loved Simplicity bias maker and I pressed the old fashioned way - actually on the old cover before I removed it! 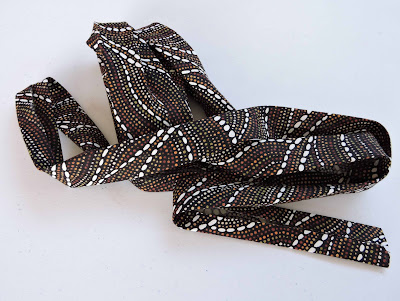 I then machine stitched the bias strip around the outside of the cut piece, starting in the middle of the short straight end.  One raw edge of the bias tape was aligned with the raw edge of the main cover, right fabric sides together.  I also folded under 1cm of the tape at the beginning to reinforce the opening where elastic would be threaded and joined. 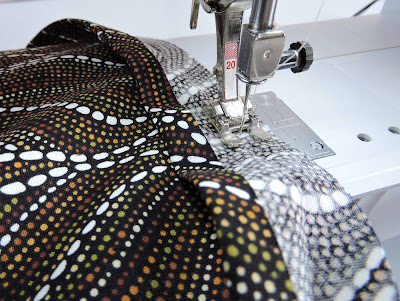 The last leg was to fold over the bias tape to the reverse side of the cover so that the folded edge just slightly covered the stitch line.  I then machined in place using a small zigzag stitch.  I ended up with a small gap where the bias tape beginning and ends met - just the right size to thread the elastic through on a bodkin.  I was quickly reminded that it was best to put in a few stitches to hold the elastic around the bodkin hole before starting to thread - the elastic unthreading when half way around was a little frustrating! 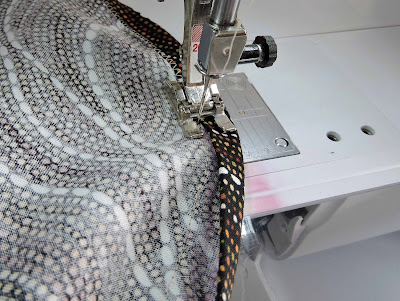 And so an hour of cutting and stitching gave me an ironing board with a little heart.  My choice of aboriginal design fabric was probably not one what those who know me well would expect.  This being the case, it was surreal to meet my new creative neighbour Suby the day I made this and find that the fabric reminded her of home in Australia - even better! 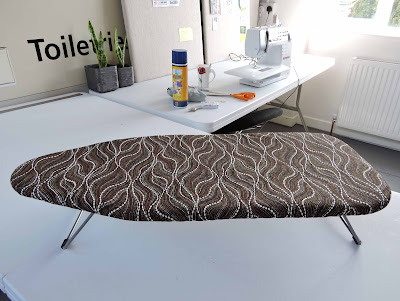 Posted by Somerset Stitch at 09:13