There have been many times in my life where I crave hand stitching above all other kinds.  The first type of stitching I was formally taught, I find the simplicity of working a hand needle and thread, soothing and calming.  For those who have never been taught, give it a whirl and you too may experience all manner of positives.  I have enjoyed various types of hand stitching over the years and quite often come back to crazy patchwork as it is a brilliant way of using up small scraps of fabric too.  For anyone who has yet to try hand embroidery and fancies a go - keep on reading. 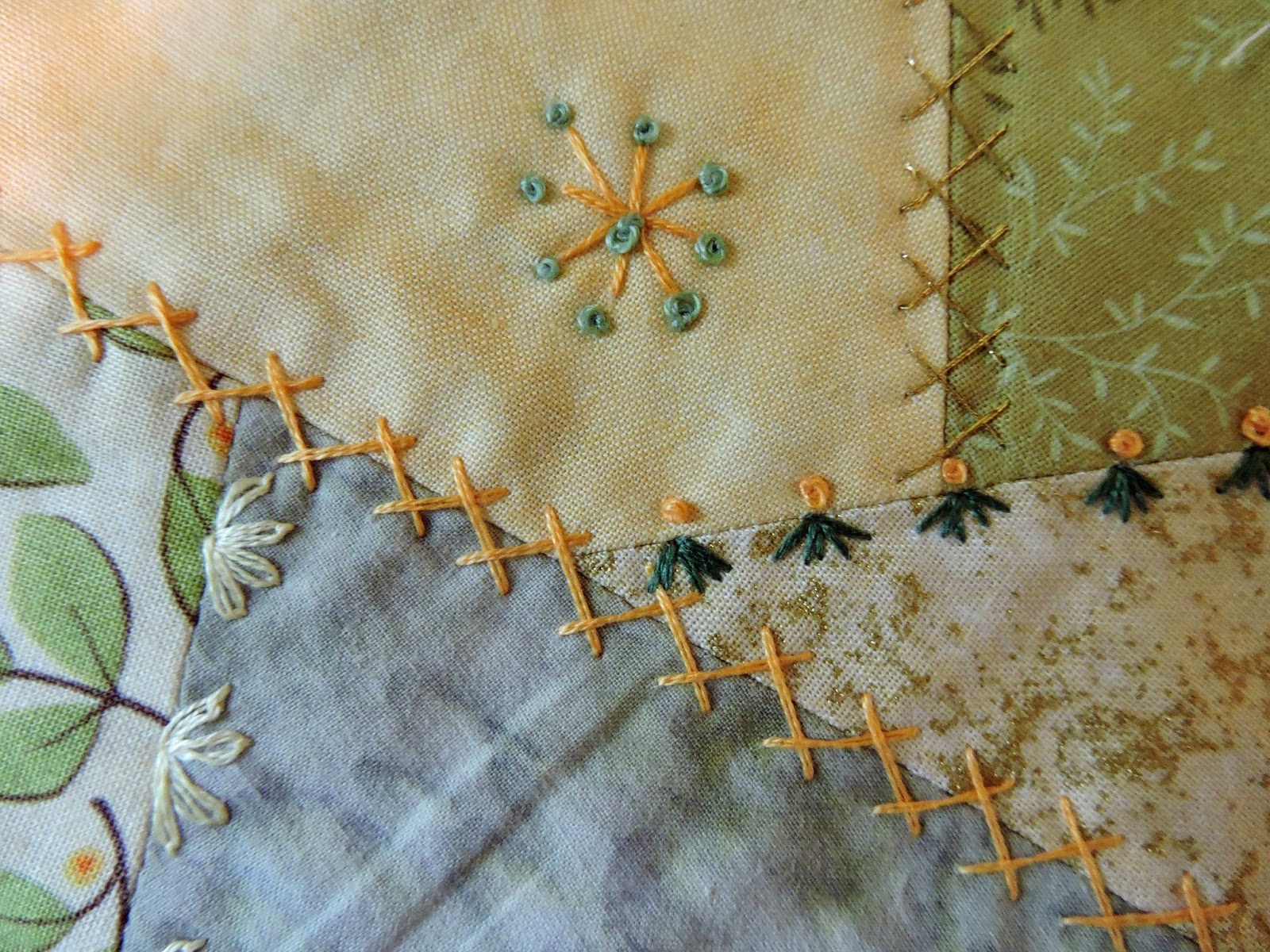 First of all let's talk hand embroidery thread - I'm going to keep it simple!  The main embroidery thread of my childhood that first comes to mind for many is stranded cotton thread - known as 'floss' in the US.    Made up of 6 strands which can be used individually or in multiples, and DMC and Anchor are the best known makes.  Here is my box that I have lovingly kept for the last 25 years - I love the little cards to put the thread on and have always taken the time to put the number and make! 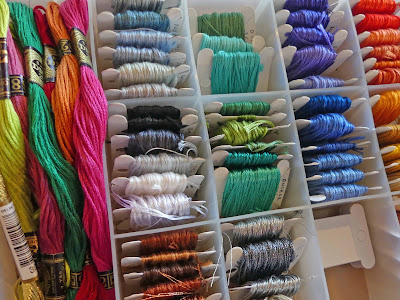 For anyone who has never done hand embroidery stitches, 'perle' thread is probably and easier thread to begin with.  Perle thread does not divide and you use straight off the reel.  Again Anchor and DMC are the most common makes and the weights available are - 3, 5, 8 and 12.  I have found size 8 the most useful overall for a range of hand stitch projects and have plenty in my studio for anyone in need. 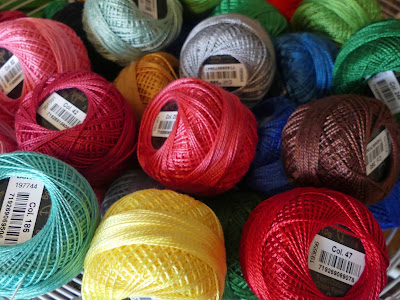 So getting to stitches, I'll begin with cross stitch - a simple stitch that is easy to make and yet is very versitile.  It is globally the oldest of the embroidery stitches and dates back to the Middle Ages.  My method of stitching by hand is to create a row of forward diagonals first and then to go back on myself to create the cross.  Getting the stitches even without any kind of guidelines can take a bit of practice and as with all embroidery, removeable guidelines may help in the first instance. 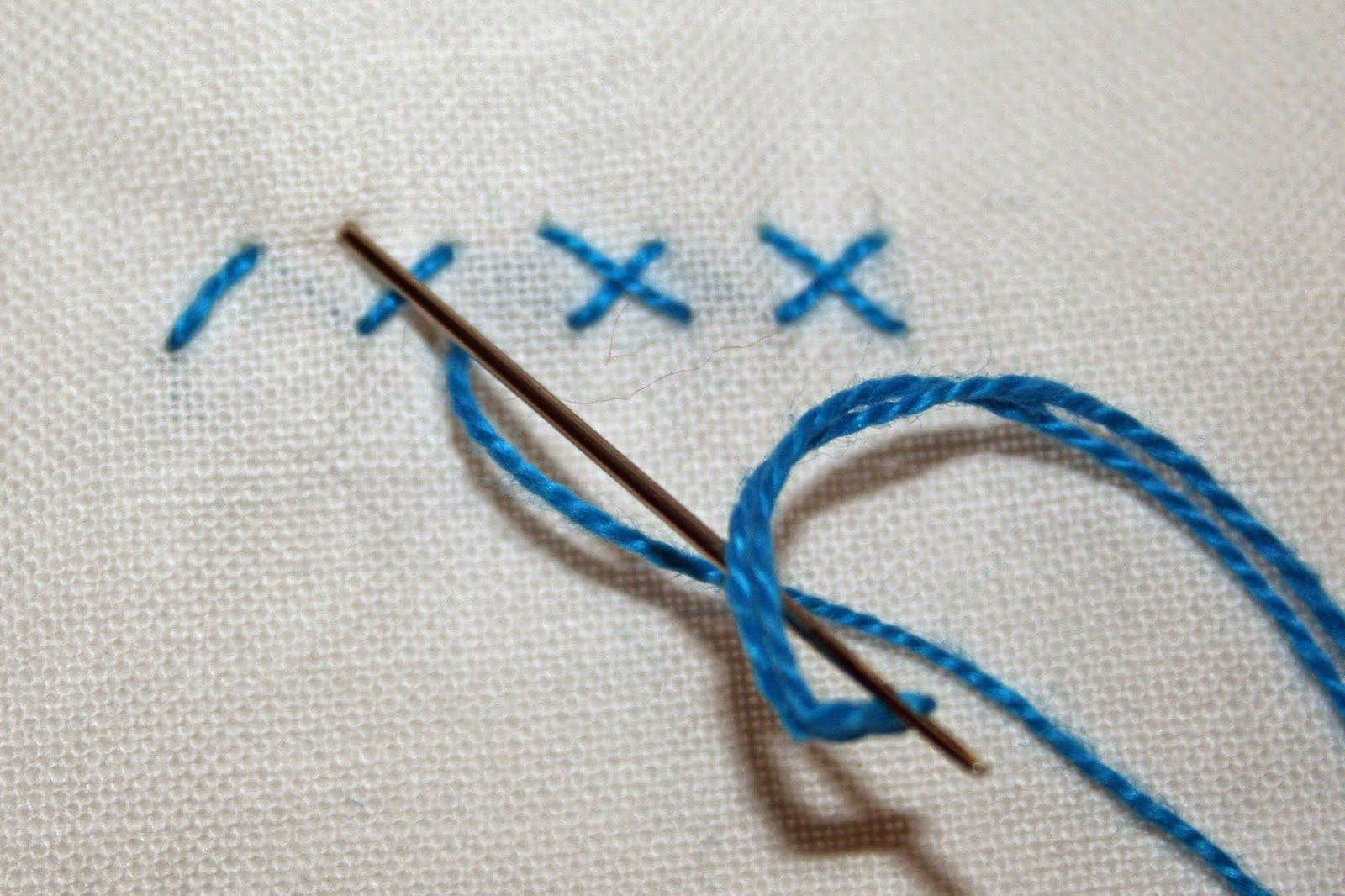 A button hole or blanket stitch is similarly a well known and long standing.  Sometime call 'whip' or 'crochet' stitch, it is has been traditionally used decoratively to edge blankets and is also the basis of the stitch used for surgical sutering!  It is created by looping the thread around the top of the needle after it is pushed through the fabric and before pulling through. 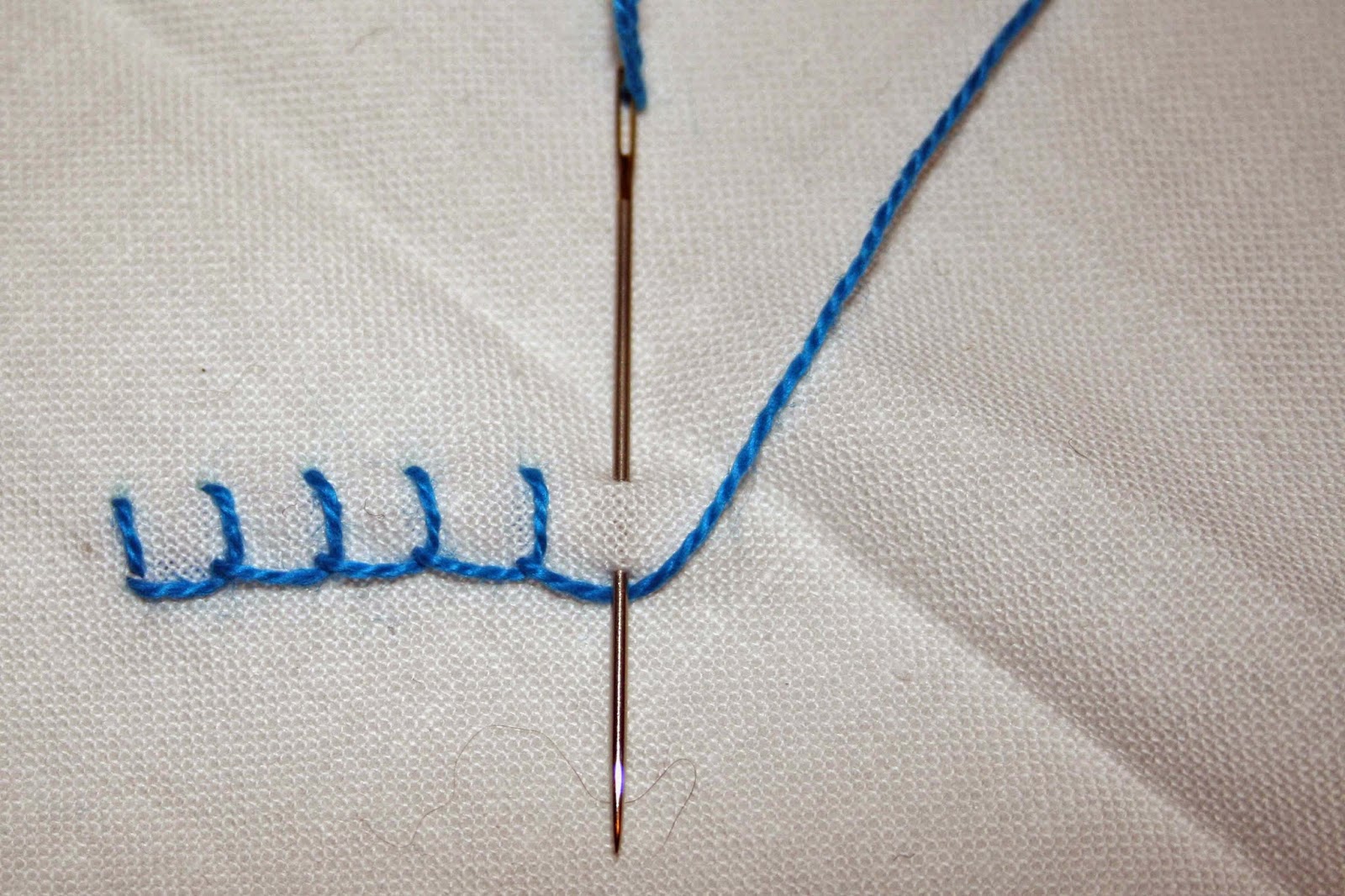 Chain stitch has a history based around the 'Silk Road' and was originally done in silk thread.  The stitch is made by pushing the needle through the fabric, often in a line, and similarly looping the thread around the top of the needle before pulling the needle through.  It is a brilliant stitch to create flowing lines has therefore been used by many cultures for 'drawing'.  Being required to pass only through one layer of fabric, it is also very useful for decorating close to the edge of seams. 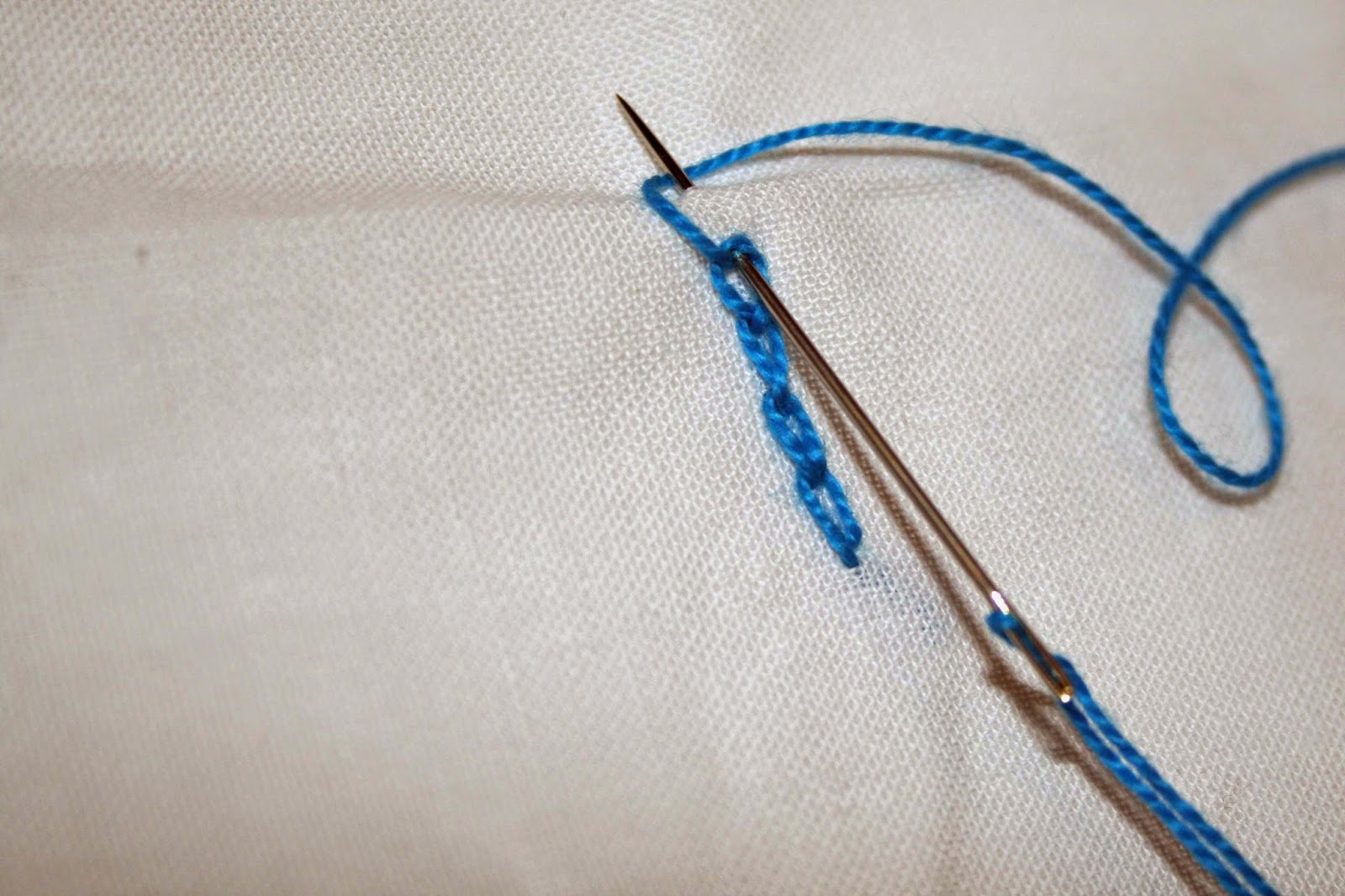 My favourite stitch for crazy patchwork is herringbone stitch.  Along the lines of a cross stitch, it takes a little more thinking to create crosses on a parallel as you stitch.  It can be helpful to have upper and lower guidances to stitch within.  The stitch is created by taking backward bits of fabric along the upper and lower line of work so that the crosses are staggered. 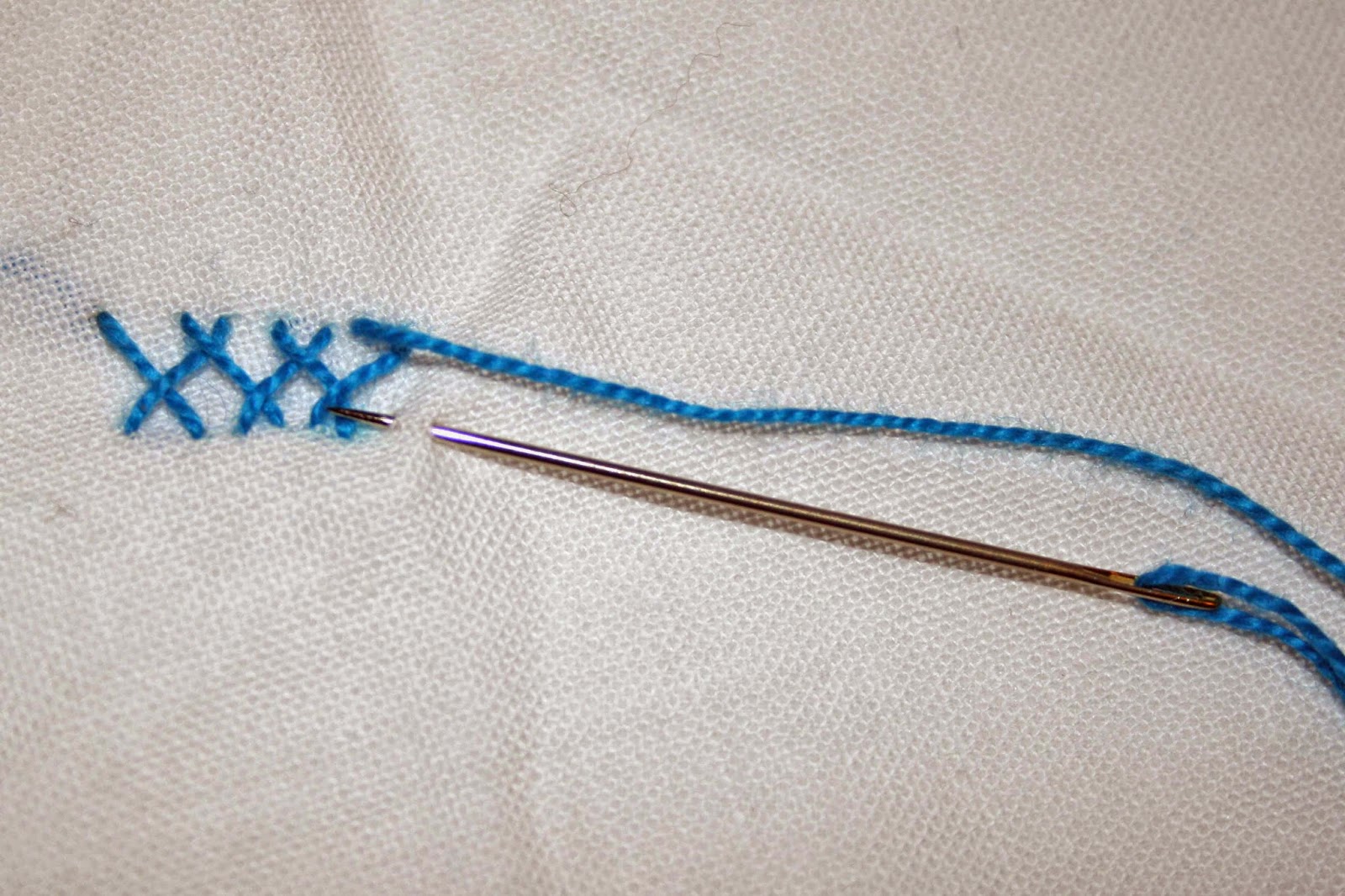 Feather stitch sometimes known as 'Cretan' stitch or faggoting is characteristic of Crete and the surrounding regions.  In was frequently used in the 19th century in England for decorating smock fronts and also decoratively for crazy patchwork.  The stitch is created by taking bites of fabric to the left and right of a central position to give the effect of branches. 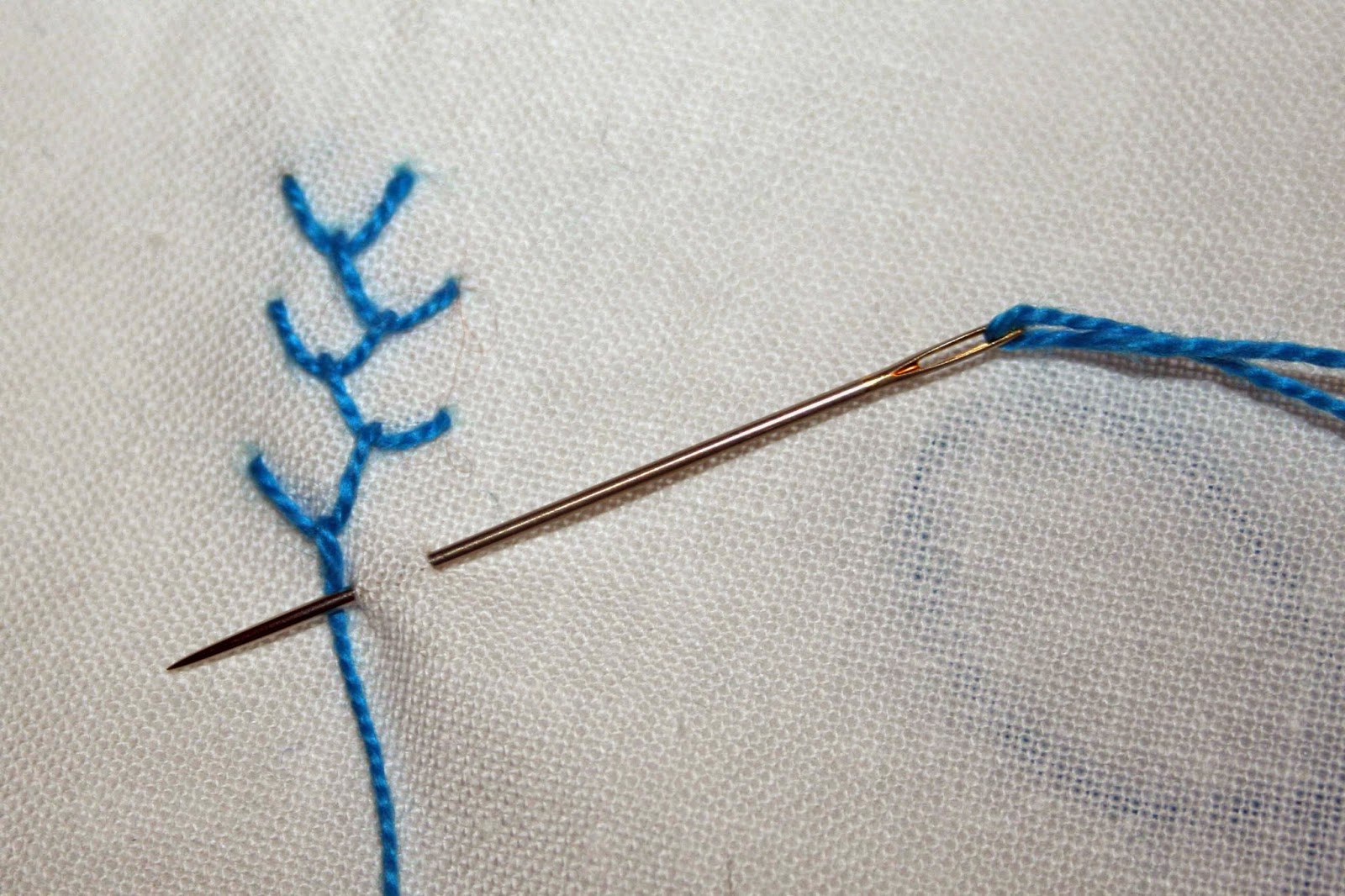 And finally, to a french knot also called a 'seed' or 'knot' stitch.  It is believed that there is historically in excess of 20 versions of this stitch which can be used singularly to embellish or in vast numbers for a textured mass effect.  The stitch is made by winding the the thread around the needle before pushing the point of the needle back in close to the point that it came out of the fabric.  My top tip for success is to keep the needle is pushed back into the fabric.  It is well worth experimenting with the effects that can be achieved by winding different threads a different number of times around the needle. 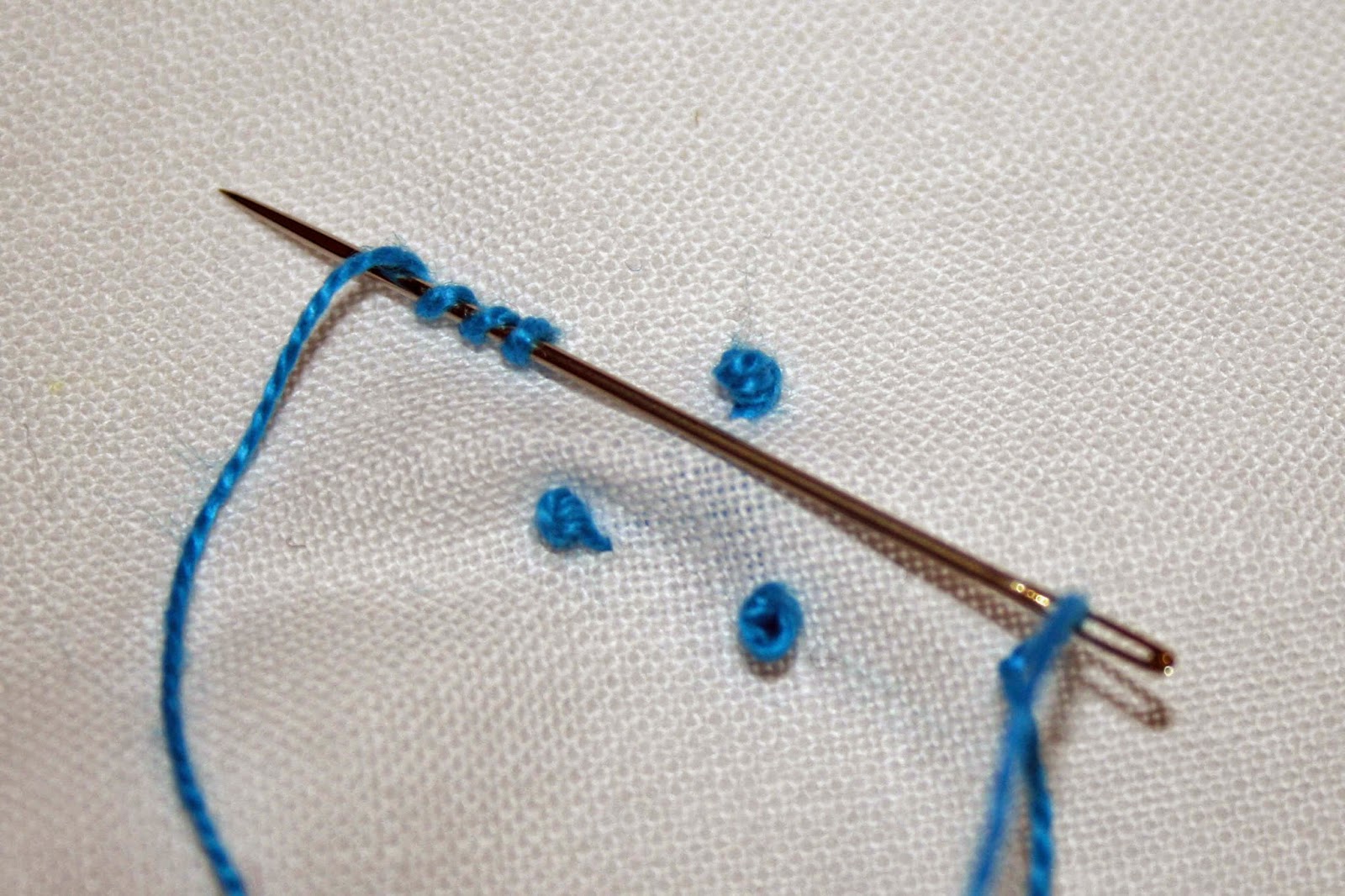 And one final tip for anyone experimenting with embroidery stitches for the first time to avoid tangles.  Firstly, avoid trying to work with too long a lengths which will almost certainly create tangle situations - generally no longer than the length of your forearm. Some stitchers also find that allowing thread to 'hang' before use helps it to relax and avoid kinks.  As a last resort for thread that has been less than lovingly stored for a long while, the tiniest amount of 'Sewer's Aid' can prove very helpful in smoothing out. 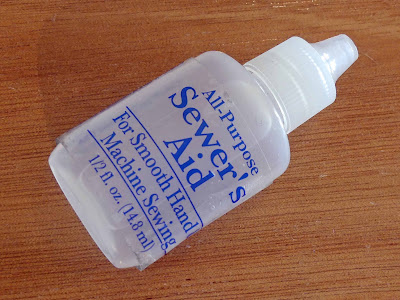 And so to deciding how to put new embroidery skills to best effect - my advice is to opt for something simple and that can be lovingly completed sooner rather than later.  My Hopeful Heart project was made at a time when keeping hope has become more vital than it ever has been and instructions of how to make can be found on this link. 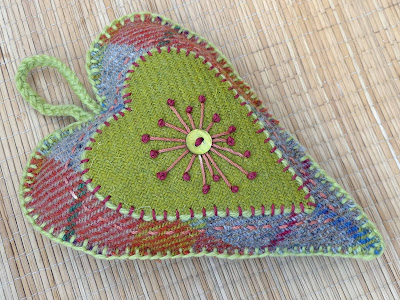 Posted by Somerset Stitch at 13:25